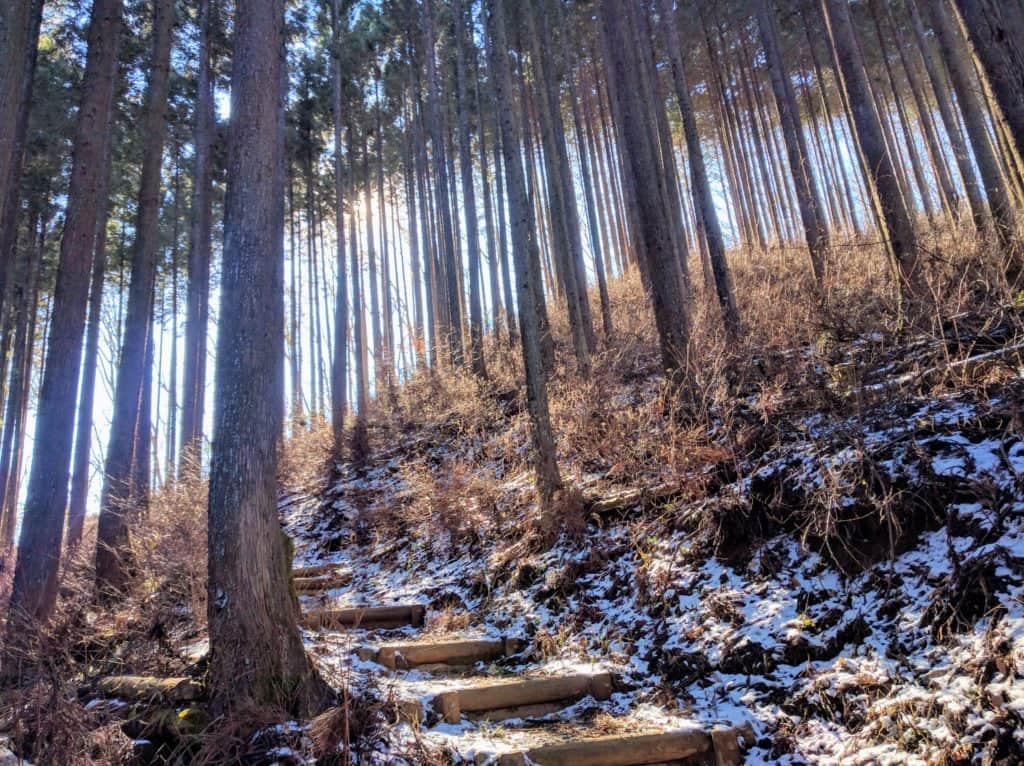 A snow swept hiking trail in the mountains of West Tokyo

“Nature” is consistently a hot topic among our readership—with on average 70% of our reader survey respondents indicating “Nature” as a key interest in Japan. Ironically, while the land itself is almost 75% uninhabited nature, the inbound tourism industry has much room for improvement in helping visiting tourists enjoy Japan’s vast natural landscape.

I was recently hiking the ancient Kumano Kodo pilgrimage trail in Kii Peninsula. Overall, it was a thoroughly enjoyable experience—the charming rustic ryokan, friendly villages dotted about—but the main takeaway for me was how the “nature” along the way didn’t measure up so well with Western tourists’ expectations. This centuries-old pilgrimage trail has been replaced in many parts with man-made cedar plantations, plus many small remote streams are lined with concrete. The trail is bereft of much its original natural landscape and wildlife. Indeed along the way I chatted with some visiting British tourists, whose expectations of a Unesco World Heritage site were not being met by the gloomy mono-culture cedar forest.

Sadly the abundance of man-made cedar plantations and concrete flood/sea defenses takes away the “natural” from many parts of Japan’s nature. Of course, a certain amount of the flood defenses are absolutely necessary to save lives, but I’m often puzzled at the extent of the concreting of nature in Japan and whether it’s driven more by fiscal budget planning than flood defense planning. Moreover the gloomy cedar plantations may be a risk in themselves, the lack of natural diversity may increase soil erosion and landslide risk. 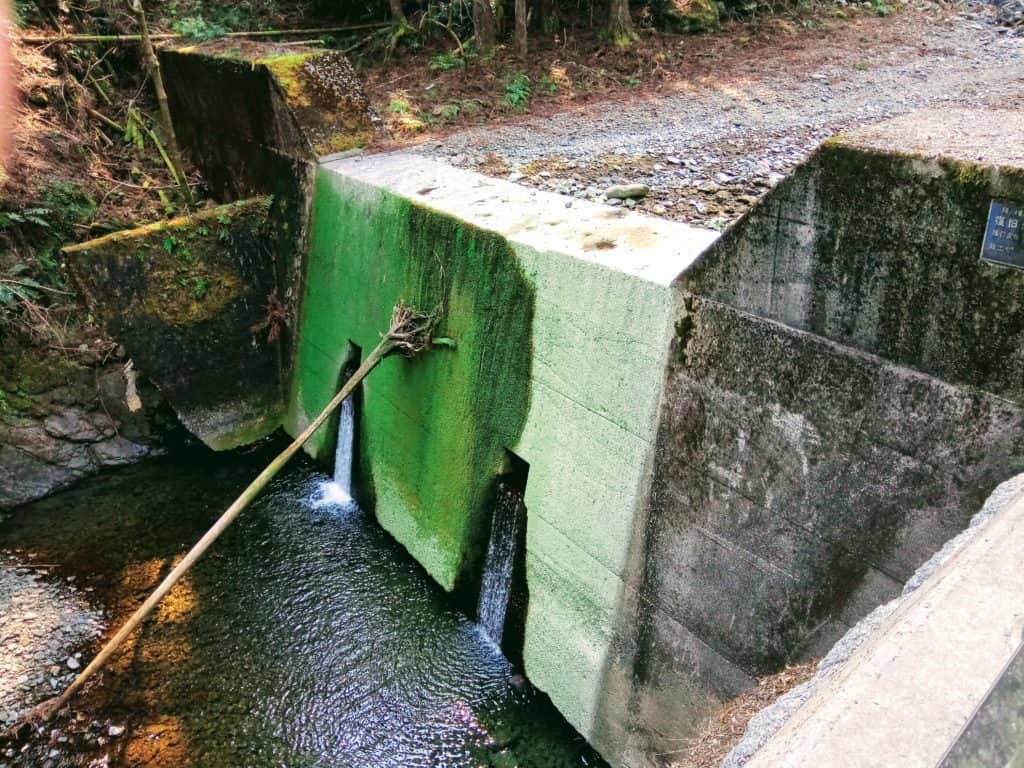 The splendor of a Unesco World Heritage Kumanokodo concrete installation

One aspect of our trip to Kumanokodo that merits as special mention was the organisation that organised our 3 day tour, Kumano Travel. Kumano travel is a shining example of what rural Japan needs to attract the much coveted foreign visitors. The organisation is a community-based initiative focusing on sustainable tourism and grassroots tourism development of the region. Without their help, booking accommodation with 3 separate countryside ryokan and arranging for luggage forwarding would have been tricky, even for good Japanese speakers.

When we were visiting I spoke with Brad Towie, one of the key members of the organisation about their structure and approach. It became clear that his patience, determination, and fluent Japanese must have been a key ingredient for the success of the organisation. Brining foreign tourists and a modern multilingual booking system to rural Japan took many years of painstaking work, from driving out to remote ryokan to school them on using email, to gaining the trust of key stake holders and obtaining the necessary finance and licenses.

Given the ethos of the organisation and the very reasonable prices, I’d presume that this is not a highly profitable enterprise, certainly not in the same league as the destinations along the “Golden Route”. So a strictly commercial venture would perhaps be less likely to appear. Such community led ventures and critically, experienced foreign residents such as Brad are key to better opening up Japan’s countryside to foreign tourists.

And Kumanokodo’s cedar plantations aside, there’s still plenty of beautiful countryside and nature in Japan. However much of it remains unknown or oblique to foreign tourists. Many of the well-known “natural” sights are just a checklist of specific attractions like “The Snow Monkeys”, “Rabbit Island”, and the Kawachi Fujien “Wisteria Tunnel”, rather than natural phenomena like lakes, forests and mountains. In contrast, Europe is famous for the Alps, but how many Europeans know of the Japanese Alps? 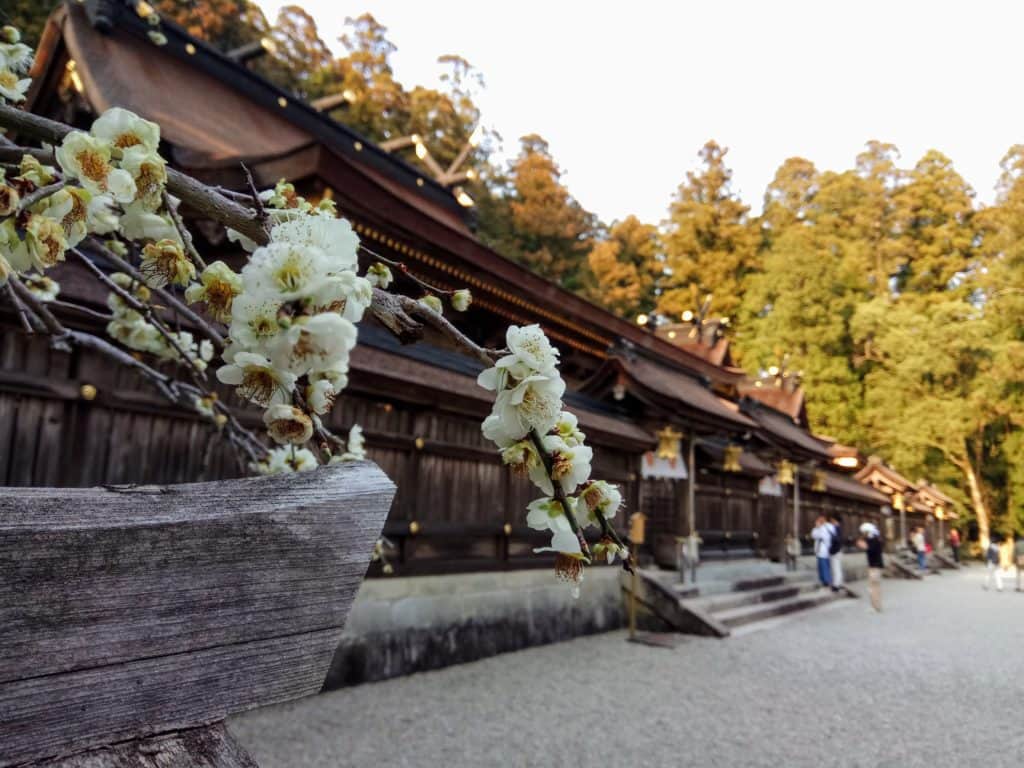 A Country of Only One Mountain

Mount Fuji deserves special mention as, by a staggering margin, it is the most popular mountain for visiting tourists to hike. At first glance it’s understandable that this beautiful and iconic symbol of Japan attracts such interest. But up close, the reality is that hiking Mount Fuji isn’t quite as beautiful an experience.

During the brief, very busy hiking season, the climb up resembles a long queue; transport and accommodation options book up early; and weather conditions can often obscure the view. A visiting friend described their Mount Fuji experience as, “A trudge up a scree slope in a cloud.” The famous saying goes “A wise man climbs Fuji once. Only a fool climbs it twice.”—however perhaps given the recent crowds, the wise man would now forgo Mount Fuji altogether for one of the numerous other great hiking experiences in Japan?

I’m always keen to suggest hiking one of the many mountains near Mount Fuji; no queues, more pleasant, varied terrain and you can actually view Mount Fuji in all its splendor. 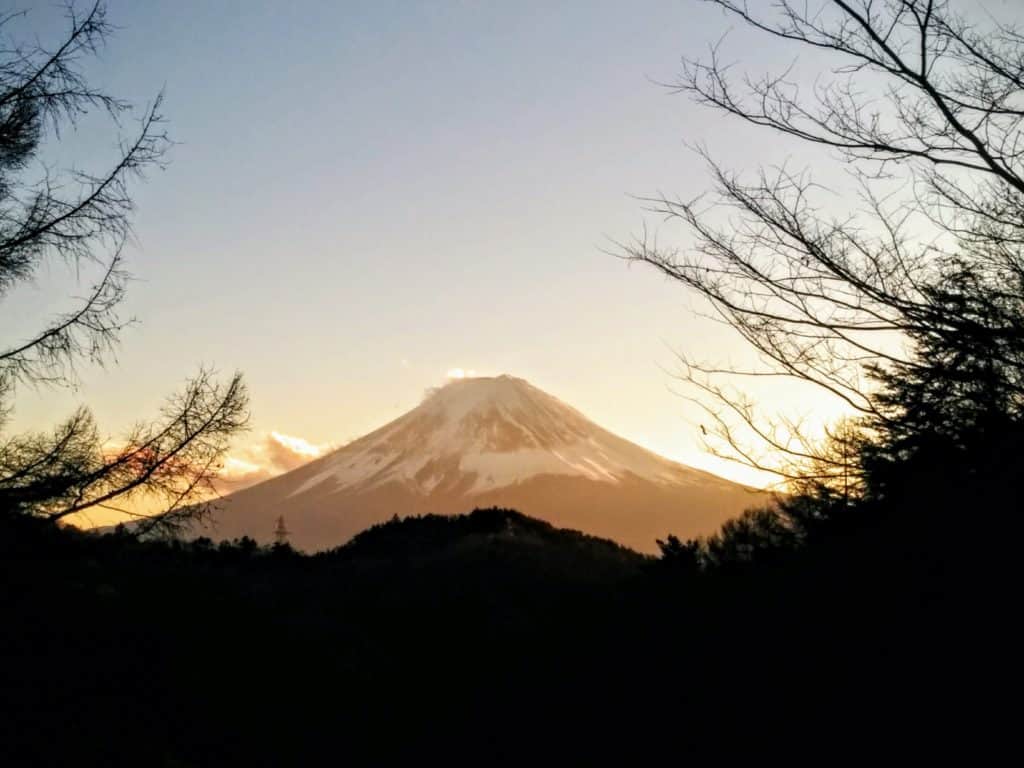 Mt Fuji looks spectacular, but you can’t see it if you’re hiking Mt Fuji itself.

Hiking The Rest Of Japan’s Peaks

As a regular hiker myself, I’m always impressed with the well-organized and well-maintained hiking trails in the nearby Kanto and Chubu regions. Many routes are well served by reliable public transport, with clear signage and maps along the way and an abundance of mountain lodges (yamagoya) for comfortable overnight accommodation at altitude. However apart from Mount Fuji and Mount Takao, I have almost never seen any foreign tourists during my hikes in Japan, unless of course I’ve brought them with me. Of course this is quite easy to understand when you realize most useful and practical information is not available in English. In a country packed full of hills and mountains, making the hiking infrastructure more accessible to foreign tourists seems a no-brainer for attracting the much coveted tourists to all prefectures across Japan.

With a few exceptions (for example the Japanese start-up Yamap) most of the good resources available for English speakers in Japan are being produced independently by enthusiast native English speakers living in Japan. For example Ridgeline Images the excellent hiking blog, Henro.co – a site dedicated to helping protect and promote the Shikoku Pilgrimage trail, and of course our own hiking articles on Tokyo Cheapo and Japan Cheapo. Despite the huge sums of government and corporate money and energy being invested in tourism promotion in Japan, it seems a huge waste that those already doing a good job generally aren’t being involved in this. Similarly to the Kumano Travel success story above, it would make sense for more local authorities/communities to collaborate with and support local foreign residents and those already creating websites/resources used by tourists. 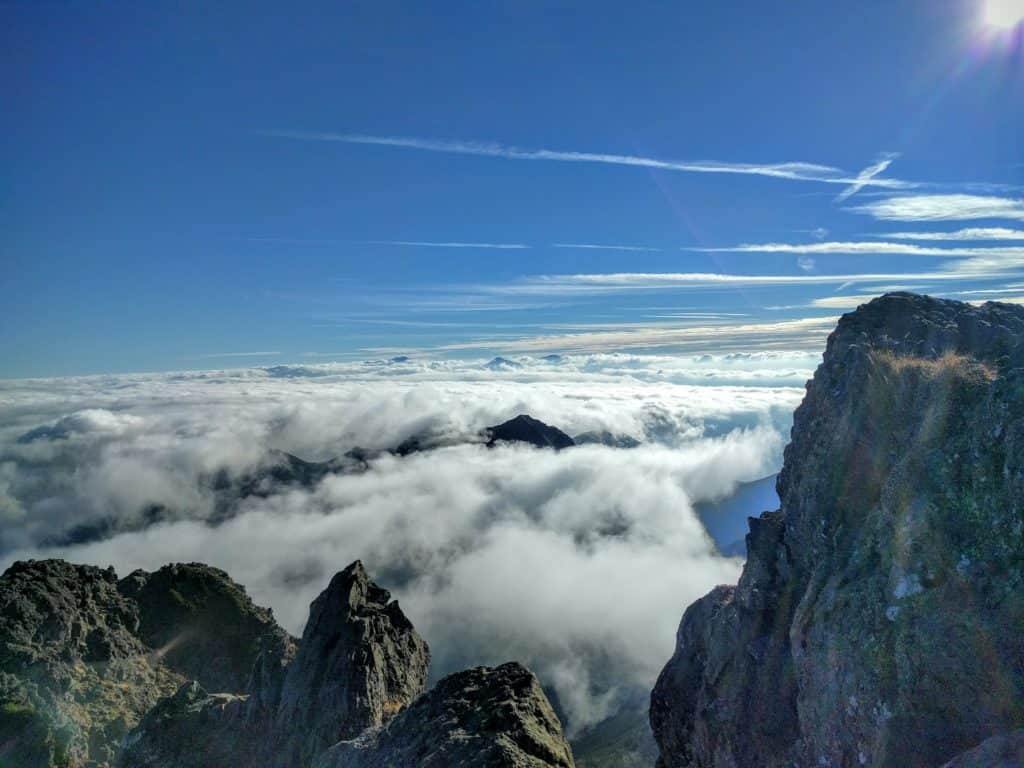 Then there are the differences in interests of the foreign nature tourist compared to the domestic one. While domestic tourists flock to countryside souvenir shops, Western tourists would mostly be happy with just taking only their memories back home. Telling their friends back home about their experience meditating in the forest temple with Zen Buddhist monks is far more important than having some trinket or souvenir to give them.

And in general, some of the sights that attract domestic tourists probably have much less appeal to those from overseas, e.g faux wooden pirate ships (Hakone), fields of lavender (Furano), modern steam trains (Paleo Express in Chichibu). Typically travelers seek new and novel experiences, so to Western tourists (fake) old wooden ships are old hat, but a countryside ryokan/hot spring is a special experience. Even a cheap Japanese holiday—a countryside minshiku stay with good food plus a soak in the local hot spring would make for a memorable experience for most Western tourists, especially those interested in nature. 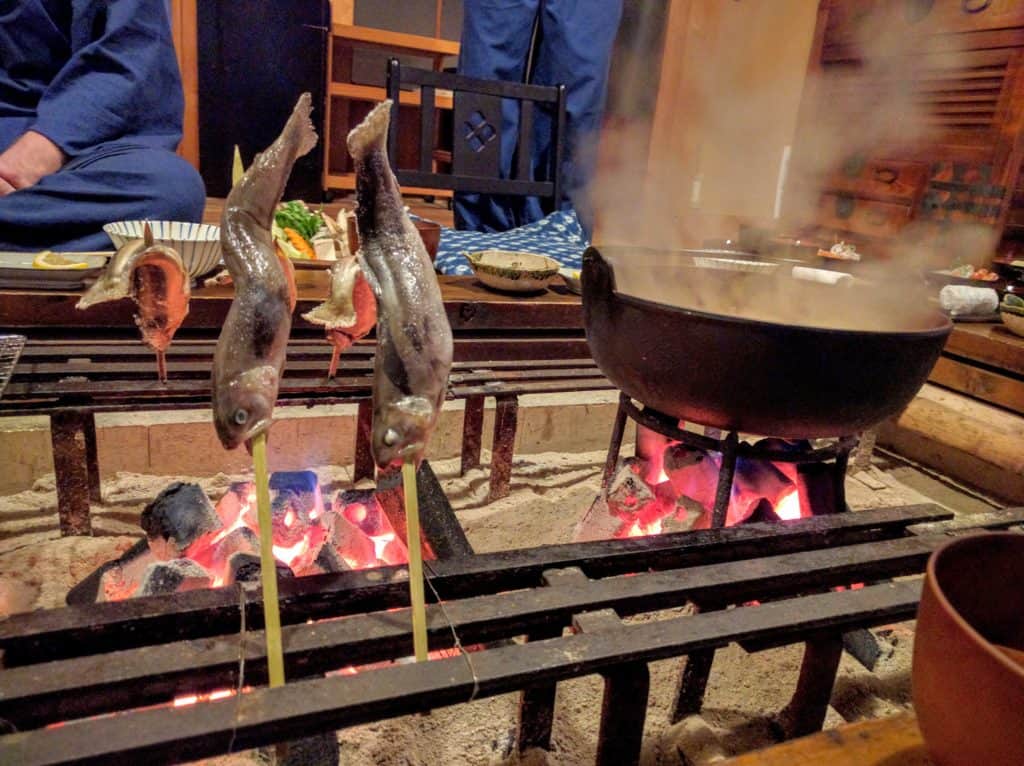 One of the most enchanting countryside experiences I’ve had so far was staying at Takimihouse in Nagano, near the old “Nakasendo” route (the old road between Kyoto and Tokyo). A really beautiful ryokan and hot spring whose owner I became friendly with. He mentioned his quandary in attracting more foreign guests—the domestic online travel agent he was using suggested having pictures of foreigners on his website would dissuade Japanese guests! Moreover, the most viable way for reaching potential foreign guests (aside from good press like Japan Cheapo) is listing his ryokan on Airbnb, which is a non-trivial task for a ryokan owner with limited English and understanding of Western internet users. There seemed to be no domestic service in a position to assist in bringing foreign guests to his ryokan. I suspect there are countless hundreds of similar ryokan dotted across the country that would make for a truly memorable experience for foreign visitors, but sadly their means are limited for reaching potential customers.

From our audience surveys there’s clearly a demand amongst western tourists for seeing the countryside and nature in Japan. The weak links in the chain for attracting more tourism into Japan’s countryside and nature is good information, effective promotion, and facilities with foreign tourists in mind. As mentioned above, often (and hardly surprisingly) the good examples of these are incentives coming from foreigners, or made with key members of the team being non-Japanese.

Finally on a more positive note, the Nakasendo Trail in the Kiso Valley did make for a smooth and welcoming experience to Western foreigners. Access was good, the locals kind and friendly, much of the signage was easy to follow, and there was even free high-speed wifi dotted along the path! 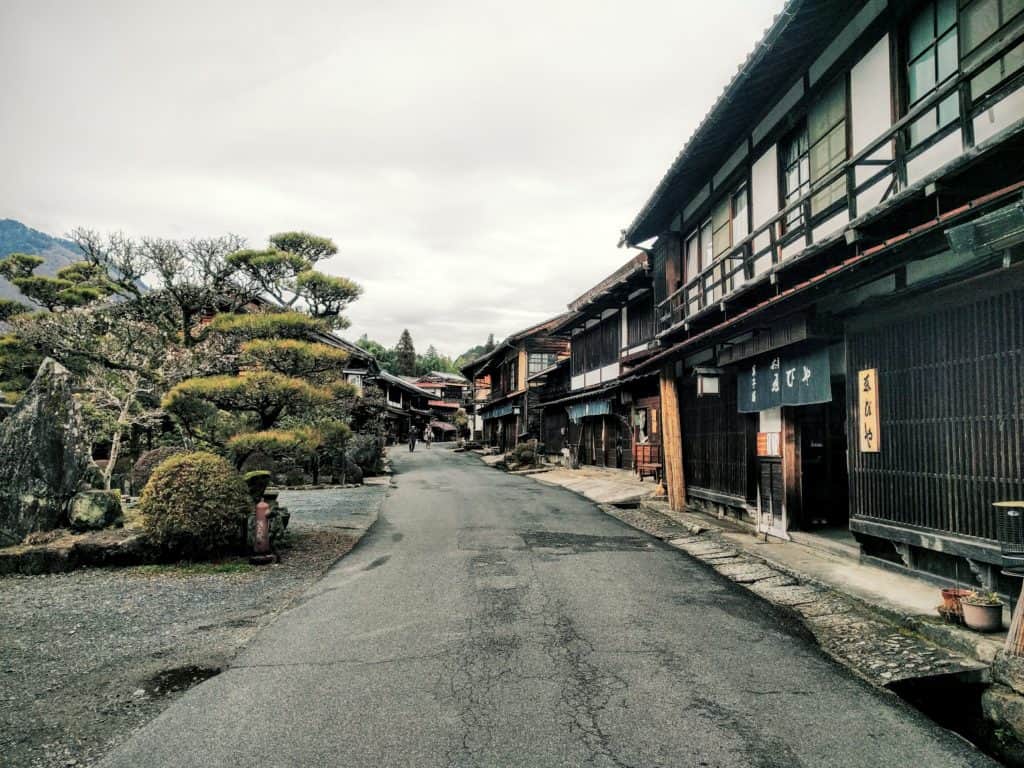